This was my first participation in the WAG contest since 2010 - and I must say, it was a pleasure!

I've planned to sell my ELECRAFT K2 so I placed some adds in the various HAM sources and I found a buyer willing give my K2 a new home.

Fortunately I decided to do a quick check on the K2 functions, to be sure, that the buyers receives a full functional K2.

I did the check in the late afternoon on 80m and I was shocked - strong stations can be received every 7kHz. Testing the transmitter shows a totally unstable RF signal.

Some weeks ago I've build a full-featured XPhase for my father, DK1UO. He is sometimes affected by heavy interference from Plasma-TVs or similar scrap

My XPhase is based on the work of Hanns, DK9NL. A commercial versions can be found here under the name QRM-Eliminator. Google will provide you some futher informations.

I've ordered the LF-converter BX-082 kit from the German HAM Radio magazine FUNKAMATEUR already some months ago and now found the time to build and test it.

It all started with an article in the issue July 2014 of the German amateur radio magazine FUNKAMATEUR. Martin Kumm, DC3MKB published in this issue an interesting article for a smart SMD soldering station based on the well know ARDUINO UNO.

Connecting an Arduino to MOSQUITTO

In this post, I've showed, how to setup Mosquitto on an Windows 8 machine. Now let me describe, howto connect an Arduino via Ethernet to the running Mosquitto MQTT broker.

Getting started with MOSQUITTO

After my first experiments with 2elemtry, I decided to give MOSQUITTO a try. Mosquitto is a small MQTT message broker, which provides basically the same functionality like 2lemetry.

Here the steps, I got Mosquitto up und running on my Windows 8 machine:

During my researches for my home automation project I also stumbled across the MQTT protocol for sensor-server-communication. A matching arduino library was found quickly here on Nick's blog. An arduino sketch was quickly copied from here and modified. Download my version from here.

The electronics for my capacitive (water) level sensor is described here. In this article I will go a little bit in depth regarding the sensor reading and value compensation.

This is the second PCB I've developed. It is an arduino-shield for my home automation project. It is also devoped using CADSoft EAGLE and was produced by PCB-Devboards in Germany.

The hardware for the MODBus master is mounted on DIN-rails inside a cheap installation box.

The MODBUS-slave with the capacitive water level sensor is now mounted inside a die cast aluminium case.

Here my findings regarding each electrode.

This is a MODBUS-node with a capacitive water level sensor, a DS12S80 temperature sensor and a RS485 interface to the main controller.

This is my first project based on CADSOFT Eagle free-version. I still have to learn a lot for creating 2-layer PCBs :-/ 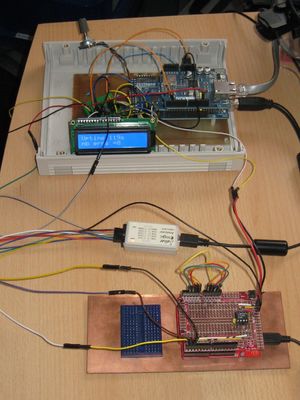 From top to bottom:

The Arduino Mega256 is the MODBUS master with connection the internet data collection server. The Seeeduino is acting as a MODBUS slave providing 4 analog and 1 digital register.

Read on about the next steps here:

Usually the MODBUS protocoll only supports registers based on 16-bit values. If you want to transfer custom datatypes like double, float etc. via the modbus a simple trick can be used.

I've discovered, that the value of the weighting feature is not saved to the EEPROM. I'Ve updated the Sketch.

All my changes in the sketch are surrounded with a conditional statement:

and should be discovered easily.

I've applied the following extension to my nanoKeyer: