This is a MODBUS-node with a capacitive water level sensor, a DS12S80 temperature sensor and a RS485 interface to the main controller.

This is my first project based on CADSOFT Eagle free-version. I still have to learn a lot for creating 2-layer PCBs :-/

The board features are:

The boards is based on an ATMEGA328p processor - same is used on the current ARDUINO UNO SMD version. The idea is, that I once program the ARDUINO bootloader into the ATMEGA328p using the 6-pin header. Later I can update the code using the regular FTDI-6-pin header via the ARDUINO development environment. 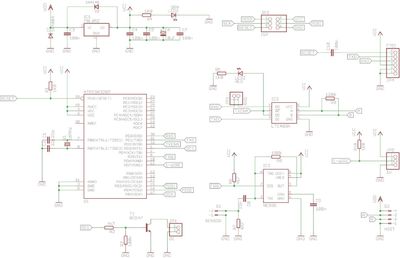 The capacitive sensor is based on the work Nathan Hurst.

And this is my first PCB:

The board was produced by PCB-DEVBOARDS in Germany for a reasonable price.

I'm still waiting for some components, so I started testing the power-supply and the capacitive level-meter

Today Reichelt delivered the missing components - first of all the ATMEGA328P. Most component on the board are now populated. 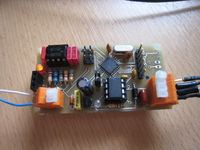 After full testing I will remove the solder flux and clean the board.

Next action was flashing the bootloader using my ATMEL AVRISP MKII. (The ISP connector is the left 6-pin header). Inside the ARDUINO IDE I've selected the ARDUINO DUEMILANOVE w/ ATMEGA328 board.

Flashing was an action of about 2 minutes using the ARDUINO IDE.

And the first version of SKETCH is also now loaded using the FTDI cable. (This cable is plugged onto the right 6-pin header)

Here some more pictures of the populated PCB 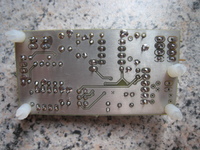 Read on about my experiments regarding the capacitive level sensor.