You may have seen my build version of the M0UKD sensor keyer and the Bamatech sensor head. 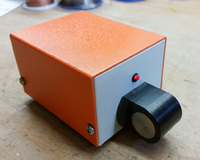 As you can see in this post, I've used a simple slide switch to control the power for the sensor keyer. This was a little bit annoying, as you must always check, whether you've turned of the power, when you leave the shack.

As power consumption is not really a big issue - the keyer draws about 2.5mA from two AA-cells. Based on the capacity of an average Energizer Classic AA battery of 1.200mA you will get an on-time of about 300h.

Since many months I've had the idea, to add an electronic switch to the keyer, so it switch of automatically after 15 minutes of idle time.

The logic necessary for this kind of switch can be done in discrete components or you can use a simple micro controller. I decided to go for a micro controller. I use the ATMEL ATTINY85 as this chip has enough port pins, a small form factor and it's pretty cheap. For my prototype, I use the DIP version, so I can use a breadboard for soldering and you can easily remove the ATTINY for programming in an external programmer.

As you can see, the necessary parts are not much - the ATTINY85, an 8-pin DIL socket and a 100nF ceramic capacitor for decoupling.

The rest of the parts are from the sensor keyer itself.

As I have the original PCB from John, I added a simple daughter board into the metal case: 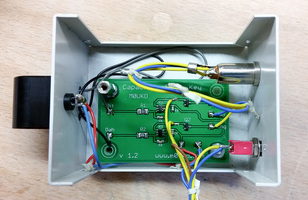 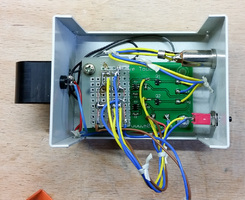 The front view is unchanged 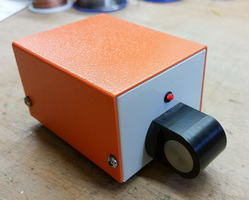 a beauty of its own. 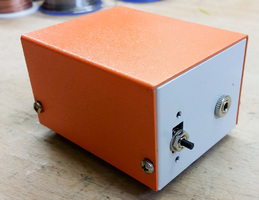 to toggle the power on/off.

The software - just a few lines of standard c code can you find here for download.

The WINAVR makefile can be downloaded here to compile the source code into an INTEL HEX file.

When the keyer is turned off, the ATTINY85 is running in power-down mode. The power consumption then is about 4.4μA. In this state, the ATTINY awakes every second and checks for a short on JP4. During this phase, the ATTINY draws about 8.2μA from the batteries.

When a short on JP4 is detected, the keyer is turned on. Now the power drawn from the batteries rises to 2.8mA.

Based on the capacity of an average Energizer Classic AA battery of 1.200mA you will get an average battery life time, when the keyer is in power-down mode of about 170.000h. I think the self discharge of any battery is much higher.