SDR-stick and RTL_433 or how to monitor road traffic

I stumpled across this intersting post on RTL-SDR.COM talking about monitoring TirePressureMeasurementSystems with a cheap SDR stick and a clever piece of software. The rtl_433 software receives and decodes signals transmitted by tire pressure sensors inside the wheels of modern (I assume at least from the last 10 years) cars. 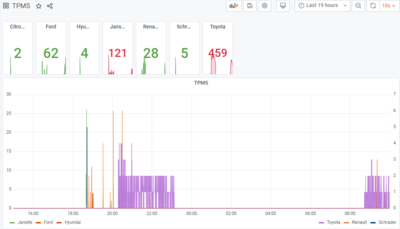 My initial idea is, that I can monitor the traffic in front of my house - at least traffic of modern cars. As Germany is a car centric country, I expect to catch most of the traffic.

rtl_433 is currently running on my regular Shack-PC using this command line:

I configured rtl_433 to listen only to the various protocols for TPMS. rtl_433 posts the received data packets in JSON format to a local MQ broker.

transforms the received JSON-data into JS objects. These are inserted into an InfluxDB time-series database.

Grafana is reading the InfluxDB data and visualizes this data:

Move the rtl_433 software and RTL-SDR stick to another unused Raspberry Pi and place it under the roof of my home.

I expect the RF coverage will be much better - lets see.

Currently the software detects and counts the number of TPMS sensors.

As a car usually has 4 sensors - you will get 1-4 readings depending on the transmit interval of the sensors in this specific car.

So there is no direct correlation between a single reading and a specific car. Lets see how I can handle this in the near future.