Frog sounds - The frog has arrived

I've ordered it as a kit from eBay Seller for about €10,- inclusive shipping to DL. The kit arrived well packed after about 15 days in my postbox.

Kit building was a fun. All parts from the parts list and the circuit diagram are supplied with the kit. Even some spare parts (Cs, Rs, ...) were added to the kit.

I finished the transceiver in a good hour completely with winding the two toroids and cleaning the PCB after soldering. If you have more time in your life, you may follow this procedure  - I've never saw someone tinning through hole resistors with flux prior to soldering them onto the PCB ?! 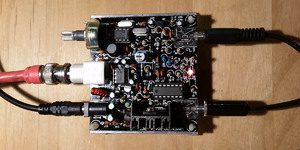 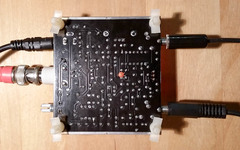 The transceiver is a direct conversion single frequency transceiver. The transmit frequency is determined by one of the crystals - in my case a 7.023kHz crystal. A second identical crystal acts as a simple filter for the input mixer NE602.

The receiver has a RIT which can be tuned with a small screwdriver. I tune it exactly to the transmitter frequency.

The CW sidetone is generated by a simple gated 74HC00 tone generator, which is directly fed into the headphone jack. The side tone frequency in my case was 1.300Hz.

As written before, the sidetone frequency with the original values is about 1.300Hz - far too high for me. Adding a 2.2nF capacitor in parallel to the existing 4.7nF capacitor creates a sidetone of 750Hz.

When you directly connect a headphone to the transceiver, you'll get a pretty wide audio spectrum with harsh clicks during transmission. About 3kHz I assume - so if you hear someone within this spectrum, he may not hear you, because modern transceivers have pretty sharp filters - and 400mW not really create much attention.

So this is a good chance for my active AF CW filter to show its qualities. I've build this filter with a FUNKAMATEUR kit some time ago.

As every direct conversion receiver, it has two receive frequencies. See the diagram below:

fTxOsc is the base frequency of the used crystal. fRxOsc is the frequency determined by the position of the RIT variable resistor. I adjusted it 670Hz higher than the transmit frequency fTxOsc.

Using the transceiver without the AF CW filter, a pretty harsh key klick is audible in the headphone. Adding the AF CW filter completely removes this click and gives a really nice sidetone.

Until now I've done some QSOs. The first two were a really hard job, not because of the 400mW but this was the first time since nearly 20 years, that I've used a manual CW key and not squeeze paddle :-(

Here is a view of my current QRPP shack: 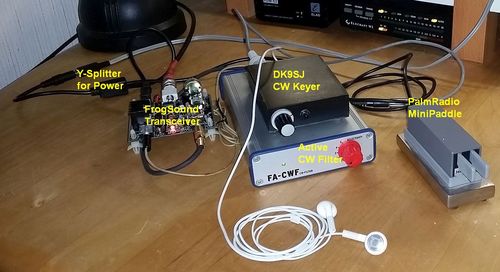 The internal voltage for most of the parts except the final amplifier stage is 6VDC. It is generated with a simple78L06 linear regulator. Feeding 13.8V into the FROG may cause a recent amount of heat to be generated, that has to be dissipated through the TO92 package.

Rising this voltage to 8V would reduce the amount of heat, but then the sidetone generator (74HC00) has to be changed, as the 74HC00 allows only 7VDC as its maximum supply voltage.

As written before, changing the sidetone to abt. 750Hz makes the tranceiver usable with an external AF CW filter.

The RIT in the original configuration a small trimmer. This is not really usable. So in the first step, I've changed it to a recycled potentiometer with a small plastic shaft. When I receive the aluminum housing for the Frog, I will replace it with a front panel mounted potentiometer.

I've done some basic measurements with my ELAD FDM-S2, a 40dB PowerPad and the Frog Transceiver:

Without any keying, as every simple direct conversion receiver, the oscillator can be heard on the air:

Adding the 40dB from the pad gives a -35dBm (about 30uW) signal from the receiver to the antenna - pretty strong :-(

results in an output signal with +25dBm = (= 400mW) with suppression of the first spurious of about 60dB - that's pretty good in my opinion.